A Brief History of the Shetland Sheepdog (Sheltie)

By Camilla - In
Sheltie Stories

When seen out on the street, Shetland Sheepdogs (also known as Shelties) are commonly referred to as Rough Collies, miniature Lassie dogs or we’ve even had our own Shelties called foxes (!) but surprisingly Rough Collies are not the main original breeding stock in the development of the Shetland Sheepdog. Keep reading to find out more about the history of our beloved breed.

Dogs of the Shetland Isles

The original Shetland herding dogs were small mixed breeds, generally considered to be Spitz-type dogs similar to the modern Icelandic Sheepdog. They were adept at herding and protecting livestock, small, intelligent and agile enough to deal with the rugged landscape and had thick double coats to help them survive the harsh winters.

These dogs were crossed extensively with working collies from mainland Britain and later crossed with other breeds such as the Rough Collie, Border Collie, Greenland Yakki (now extinct), King Charles Spaniel and Pomeranian. During this time they were often known as Toonies or Toonie dogs and were an important part the economy during the 19th century being sold to tourists who loved their small size and cute and fluffy look. However this led to the Islanders realising the original breed was vanishing so extensive Collie crosses were made to help recover the original type which started to become known as Shetland Collies. This did not go down well with breeders of Rough Collies so a few months after the first Kennel Club registration of the Shetland Collie, the name was formally changed to Shetland Sheepdog.

Further crosses were made up to the 1930s and possibly even 40s to help retain the more desirable characteristics of the Rough Collie breed. It was a challenging time due to the onset of World War I during which time shows and breeding were halted and dogs born during the war were barred from being shown. As the Shetland Sheepdog breed was still relatively new and didn’t have large numbers, some of the initial prominent breeding lines were lost during this time. However during this time, some breeding continued and these were so influential that they can still be traced back in the pedigree lines of many modern Shelties. 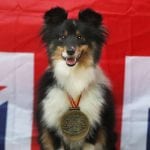 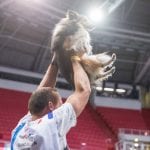 Shelties take the podium at the Agility World Championships 2019